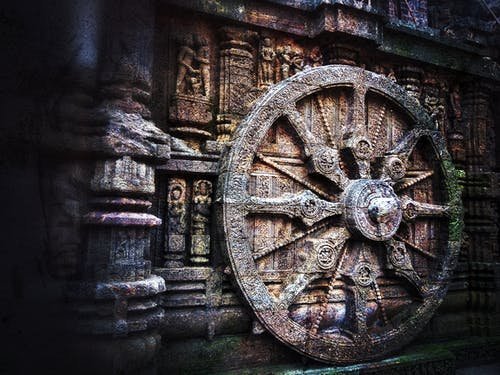 Sanathana Dharma puts forth four goals in human life: Dharma, Artha, Kama and Moksha known together as the Purusharthas. Sanathana Dharma believes that the sole purpose of life is to liberate the Aatma, the imperishable energy that resides in our body and reach out for the Paramatma or the Supreme Being. The prime purpose of Dharma is to maintain order and stability in the world by implementing virtues namely honesty, ahimsa, mercy, patience, good will and self discipline. Artha aims at the financial prosperity one should attain in life without sacrificing the virtues of Dharma. Kama portrays the longing or desire of life. Desire helps a man to pursue a course of action serving as the fuel of motive in a person’s life. Moksha is the liberation of Aatma. It is the enlightenment one achieves following the path of Dharma, Artha and Kama. Dharma is considered supreme among the Purusharthas because Artha and Kama can lead to annihilation in the absence of Dharma.

In Kaliyuga there is a decline on the virtues of Dharma. People are entangled in the comforts and pleasures of the materialistic world. Greed, envy and ego steer our mind in the place of Dharma. The dharmic path of harmony and order is on the brink of chaos. How can we break free from this spiritual instability?

Bhagavad Gita is the key to this question. The guidance given by Lord Krishna to Arjuna about Dharma and how it helped him to prevail over the mental agony and dilemma during the Mahabharata is the essence of Bhagavad Gita. Answers to all our philosophical questions can be traced in this sacred text on Dharma.

As we reach towards the first quarter of the 21st century, from cyber space to Missions to Mars, science has opened up new horizons in our life. Despite this boom people strive to find a way out of the mental stress they face in their day to day life. At this time of despair, with Bhagavad Gita to guide us, let us find solace in Sanathana Dharma and ascend to enlightenment.